Ahoy, Mateys! Pop-Up Playset (also known as Pop-Up Buccaneer Playset) is a set. It features a large pirate Thomas which can open up to a pirate ship. The engine can be placed at the top of the set and move down the I-beam pass the spinning octopus, through the barrel, and come out the bottom of the ship. Engines can also be hung from the ship's sail. It includes a pirate version of Porter.

Begin Porter's treasure quest...
...past the spinning octopus...
...through the barrel...
...and out of the pirate ship! 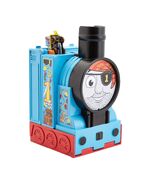 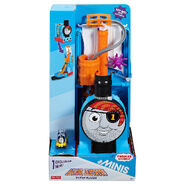 Box back
Add a photo to this gallery
Retrieved from "https://thomasminis.fandom.com/wiki/Ahoy,_Mateys!_Pop-Up_Playset?oldid=23820"
Community content is available under CC-BY-SA unless otherwise noted.